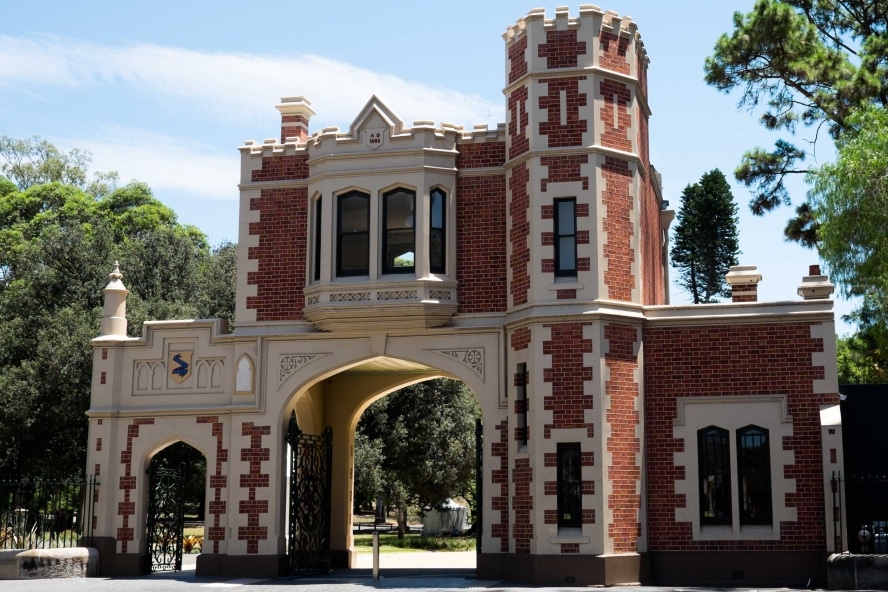 It’s time I went out west again, so today I am alighting at Parramatta. It is the second oldest city in Australia and I’m expecting a pleasant walk with some history thrown in. Join me, as I explore the Sydney suburb of Parramatta.

Following signs to Smith Street, I discover two large shiny sculptures shaped like drops of water. I realise that I’m standing outside the offices of Sydney Water. 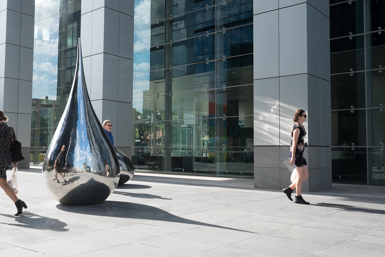 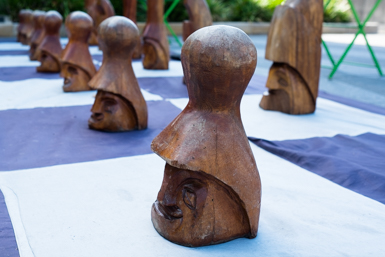 Nearby is the home of the 1st/15th Royal NSW Lancers. The Lancer Barracks, one of the longest established military bases in Australia has been in use since 1819. The museum, behind locked gates today, is regularly open to the public.

Retracing my steps, I realise that things have changed since I was last here. Instead of a series of small dingy shops, which made the roadway feel narrow and unwelcoming, the buildings opposite the train station have been replaced by a large hoarding surrounding a building site.

Signs advertise that they are “creating a better city”. A child asks her grandmother what the loud noise is. “Jackhammers” is the reply. I find out later that the controversial plans include a 90-storey building which is facing much opposition.

The plaza in front of the Town Hall is more open than I remember it. A few people sit at the coloured tables, chairs and umbrellas which brighten the scene. A large chess set and two table tennis tables await use. As I look around, two young men pick up the bats and start to play. A man gently kicks a lost ball back to them. A girl asks excitedly where she can get a ball. The simple act of putting out “playthings” encourages casual contact between people. Nice. 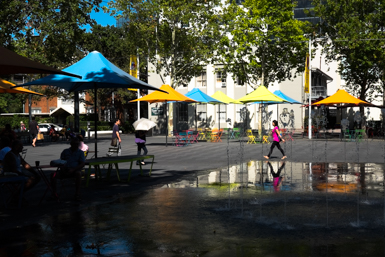 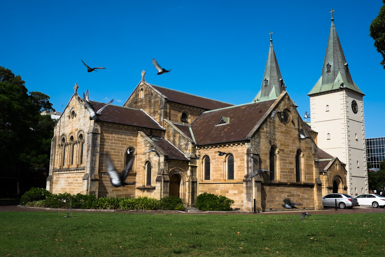 Pigeons fly past the St Johns Anglican Cathedral with its two spires. A sign indicates that services are held in English, Farsi, Cantonese and Mandarin. On the grassed area two toddlers pile up large foam blocks put there for children’s amusement by the Council.

In the square, a little girl runs in and out of the fountain that periodically shoots water out of the paving. After some looking, I find the plaque marking this as the site of the first market place in Australia, held in 1813. It’s on a pillar of the Town Hall.

I make my way to “Eat” Street, the local name for Church Street. Quiet now, the street comes alive at night, the outdoor tables buzzing. A diversion into a small arcade turns up a shop selling saris. Another sells Arabic sweets. A large Cash Converters store is doing a brisk trade. My thoughts are broken when I hear someone calling my name. A friend from way back has recognised me. We catch up briefly before going our separate ways. 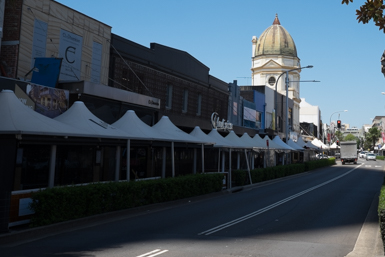 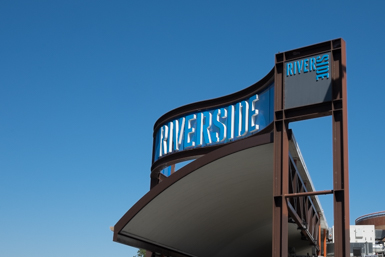 Across the Parramatta River is the Riverside Theatre and the Visitors’ and Heritage Centre. I get a map and look at early photographs and the small archaeological display of indigenous artefacts and pieces from early settlement. The Darug people lived in this area before European settlers, looking for arable land, made it their home.

Aboriginal Artwork on the path 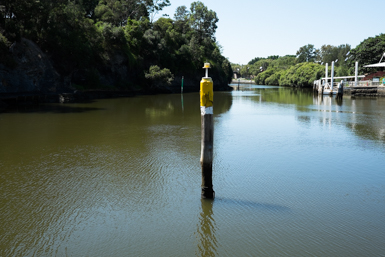 The river walk is one reason I am here. I descend the stairs from Church Street, to a pathway which is itself an aboriginal artwork. I walk over pictures which illustrate the story of the indigenous people of the area. Helpful signs provide further information. I realise I’m walking back in history as I reflect on sections depicting the stolen generation and reconciliation (a word first used back in 1805 when peace was attempted between the Indigenous people and the European settlers).

I learn that turtles were common bush tucker. There is a scene of Pemulwuy fighting settlers and another depicting the European invasion. I read that Parramatta got its name from the Aboriginal word “Burramatta” which means where eels lie down (eels like the confluence of fresh and tidal water). Now I understand why the local rugby league team is called the Parramatta Eels. 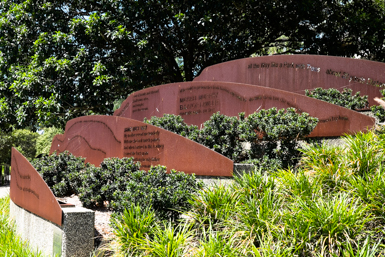 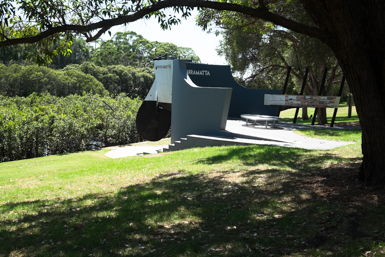 The Parramatta Wharf will soon be closed for an upgrade, but today, people await the Rivercat. I chat to a new mum. She and her 12-day old baby are off to the city with a proud dad and grandparents.

Further on, three sculptures line the path. I read quotes from early settlers on the Story Walls, reflect on the hardships faced by people which referred to in the tall red Sentry Box and realise how important the river was to trade with the Windmill Shadow representing an early mill on the site.

The stern of the HMAS Parramatta is at Queens Wharf Reserve. It was a Torpedo Boat Destroyer and the first ship built for the RAN. I saw the bow on my Garden Island discovery and the wreck of the hulk is on the Hawkesbury River near where I live. 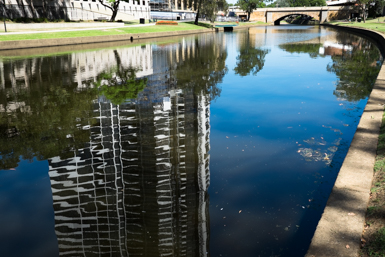 Reflections in the river

From one bridge to another

It is a pleasant, if hot, walk back to Church Street for lunch after which I walk towards Parramatta Park, another reason for my visit. On the way is the Brislington Medical and Nursing Museum housed in the oldest existing house in inner Parramatta. At the large, imposing Justice Precinct, is a sign to the Heritage Courtyard. I’d better take a look.

With the sun beating down, there are few people around. In the words of the architect, the courtyard celebrates the historic significance of the site. Colonial Hospitals and a Surgeon’s Residence were once here.

The grand George Street Gatehouse is one of six entries to Parramatta Park. Time only allows me a short walk through the park along the river to a few sites of significance. There is a memorial to Lady Fitzroy who was killed in a carriage accident. Government House Parramatta can be seen on a rise through a few trees.

I follow the river for a while and then walk up a flight of stairs to the Crescent where I discover a monument to William (Billy)Hart, the first qualified pilot in Australia.

Further on, the Boer War Memorial remembers troops from the Lancer Barracks who were killed in South Africa during the war. The place names are familiar – Cape Town, Bloemfontein, Vaalkop and Kroonstad. I was born in South Africa and spend a moment thinking about my journey to where I am now. The Bathhouse, now a pavilion, is nearby and so too are transit stones of the third Observatory built in Australia. 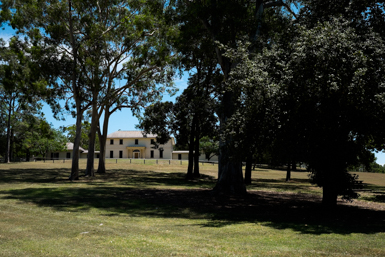 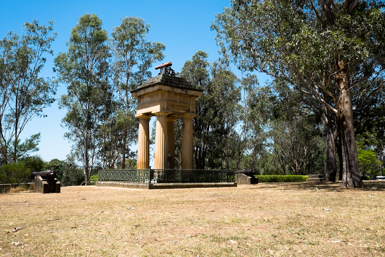 The Macquarie Street Gatehouse Tea Rooms are closed, but behind them is the Rumsey Rose Garden. Once a lumber yard and a Bowling Club, the rose garden was opened in 1995 when Heather and Roy Rumsey donated their heritage rose collection to the City of Parramatta. Past their prime today, the roses would be well worth a visit in spring.

Returning to the train station, I pass an elderly man sitting on his walker near the air vent of an office building. He has the right idea. The cool air from the vent is a welcome relief from the heat. Back in the square, a young woman plays in the water fountain. Black has won over white in the game of chess.

Parramatta is “out west”. But it is also only a quick train ride from Central. The history and culture of the area make it well worth a visit.

Plan your trip at transportnsw.info

My pre-walk research helps me plan where I go. Afterwards, when writing up a walk I may find more information. When writing up Parramatta, I found that the route I took incorporated sections from the following three walks (on the Aboriginal History, the Monuments and the Art of Parramatta) which may be useful to you.

Click here for the Burramatta Lands self- guided walk

Click here for the Monuments self-guided walk of Parramatta

The Lancers Barracks are open on Sundays or by appointment for groups.

The Riverside Theatre has an interesting program of Theatre

Note: Parking in Parramatta Park is restricted to where you can park and for how long you can stay. The limits are policed. If you can, go by train.

And a map to give you an idea (this is an approximation of the route I took): (You can download it here)

(NOTE that the time indicated on the map does not allow for any stops. I take an average of 4-5 hours when I explore):

The dots aren’t completely accurate. I didn’t do a loop around the Heritage Centre. Where it says Caroline Street, I took the stairs from near there the left. 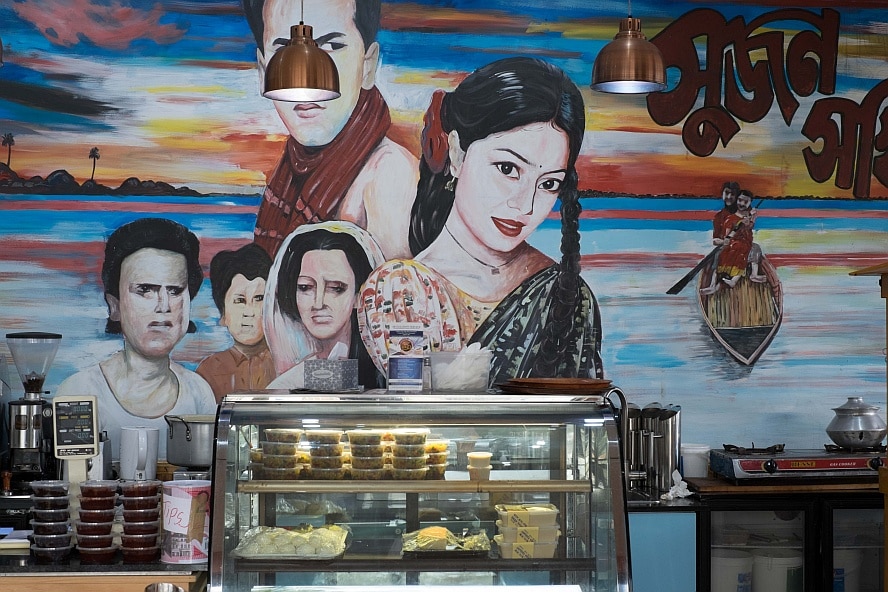 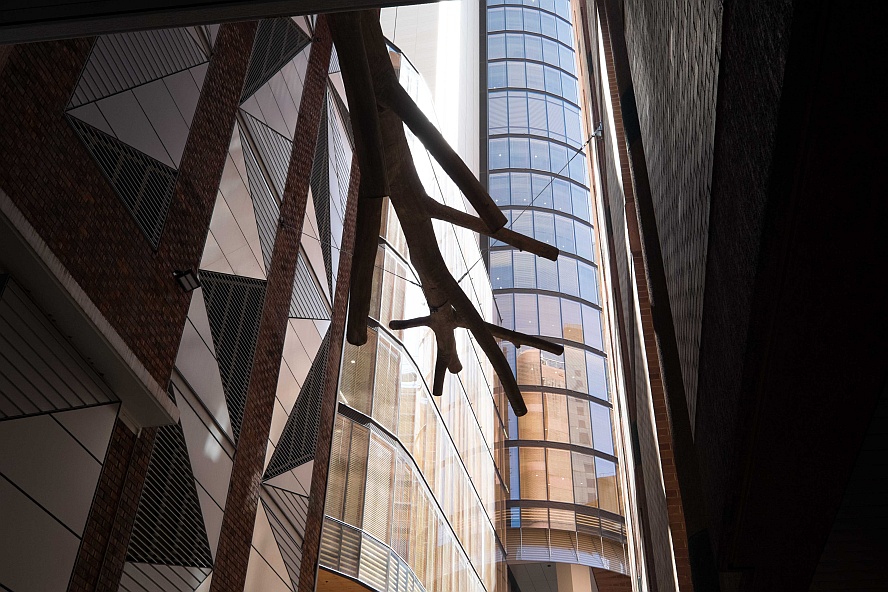 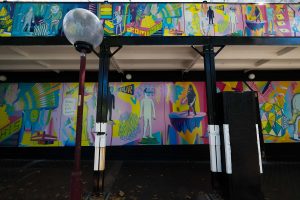