A Self-Guided Walk in Dee Why

How the Sydney suburb of Dee Why got its name is unclear. No one really knows, but what I am going to find out today is more about this northern beach suburb of Sydney. My route will mostly follow the Dee Why Heritage Walk with a little diversion.

As is often the case while waiting for the train a friend gives me a nugget. “Are you going to the op shops?” Michael asks. Apparently, there are plenty there.

Getting to Dee Why

The driver of the number 136 bus to Manly is under instruction. It must be really stressful having the instructors voice continually in his ear telling him where next to turn, what to look out for and how to take the corner.

This bus route passes through suburbs not serviced by trains and I realise that to date most of the suburbs I have walked through are accessible by train. In future I shouldn’t limit my suburban discoveries to places easily reached by train and should, like today, use the bus more often.

View from the Cafe

The driver makes a mistake and forgets to turn. The instructor decides to take over and swaps seats and her fluoro vest with him. He apologises to the passengers and comments to the woman opposite him that “It’s a bit hard”. I feel for him.

As I haven’t had breakfast, instead of starting my walk, I choose the busy Seachange Cafe for brunch. The coffee is hot and eggs benedict a good way to start the day.

“Get off your f**ing bike you bitch!” greets me as I walk towards the shoreline. A man walking his dog shouts and gesticulates towards a woman on her bicycle. He continues shouting and harassing her, leaving me feeling unsettled and wondering if I should have intervened.

The Wattle is out

At the northern end of the beach a group of surfers are catching waves. From the parkland nearby I can see Dee Why Lagoon which together with the surrounding area was proclaimed a Wildlife Refuge in 1973.  A tall white egret stands behind the simple post and rail fence. Then it moves its long pointy yellow beak towards me and takes off over my head.

What Bird is That?

On the water a whole flock of ducks paddle furiously towards the shoreline. They certainly know where they are going.  The walk along the edge of the lagoon towards the sea outlet is an easy one along a well-made sandy path.  Birds twitter in the bushes and I stop to watch a bird with a longish tail and yellow spot near the base of the tail dart and swoop to catch tiny insects. It could be a New Holland Honeyeater.

Apart from the wattle which is in flower, and the banksia, I could be in the African bush, and can almost imagine a crocodile waiting patiently in the shallows.

Relaxing beside the Lagoon

Across the lagoon is a car park that I remember well. That’s where I and two friends stopped for much needed refreshment when walking the 50km Coastrek from Palm Beach to Balmoral a few years ago now. It was early in the walk and would be many hours before, tired and bedraggled, we triumphantly crossed the finish line.

Retracing my steps, the constant drone of traffic on Pittwater Road, the occasional helicopter and the houses on the opposite shore are the only reminder that this oasis is right in the middle of a built-up suburb.

Someone has broken a banana into quarters and put the pieces at intervals along the railing. What little creature is going to get a treat today?

The weathered wooden posts poking out of the water in rows from the shore aren’t from an old jetty. They are actually remnants of tank traps dating back to World War ll.

The dual pedestrian/cycle path follows the edge of the lagoon passing a sign promoting the local Bush Care group and another saying “cats prohibited”. Perhaps they wander into the reserve from the unit blocks across the road. 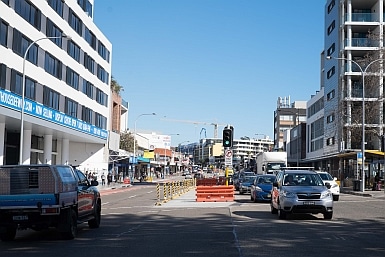 Having turned away from the lagoon two vans attract my attention. One, because of the creative and memorable company name – “Blind as a Bat” which sells blinds and screens.  The other because of the young man sitting in the passenger seat. He is watching the building work opposite and appears to have a disability. The logo on the side of the van says “Alex Aide assisting independence by delivering to the elderly”. I wish I had asked him about the business as nothing comes up on an internet search.

Pittwater Road is busy. Instead of walking along the road, I climb the stairs at the end of the car park to the Library and Council Chambers. Both buildings are marked on the Dee Why Heritage walk as places of interest. Designed by Col Madigan, the Library, noted for its brutalist architecture won the Sulman award in 1966 for its design. Until recently I thought ‘brutalist’ was a made-up term. Now I realise it’s actually “a thing”, derived from the French word for ‘raw’ and referring to raw concrete.

Pacific Lodge, built in 1892 on land which was bequeathed to the Salvation Army in 1900, is heritage listed. As it’s on private property, the beautiful Victorian filigree and detail of the house can only just be seen through the trees from Civic Street. A tall Norfolk Pine, apparently a Dee Why landmark and also noted on the Dee Why Heritage walk grows nearby. (On returning home, I discover a better map of the heritage walk than the one I used and realise that I missed the actual Norfolk Pine landmark completely).

Where is That Clock?

There is a restored tramway clock somewhere around here. I just cannot find it. A woman in the Council Chambers directs me to the corner of St David’s Street and Pittwater Road, but still for the life of me I cannot find it.  I cross the road and ask two women sitting at the bus stop. They have no idea what I am talking about. Another pointing to building work behind her says “it was there but they took it down”.

Not convinced, I ask another man if he is local and knows where the clock is as “I know it is around here somewhere”. He laughingly retorts “are you looking with man eyes” and walks me to the clock. The simple structure is right there on the corner, its green wooden post blending into the streetscape. Before bidding me farewell the man says “don’t get run over by a bus” as I step into the road to take a photo.

After viewing The Fire Station which was one of the first built in Sydney (opened in 1924), I return to Pittwater Road to seek out another building on the heritage walk. The Commonwealth Bank is a simple inter-war Art Deco building sporting a large sold sign. For now, the bank is still open despite the noisy tiling work on the footpath.

The Stoney Range Regional Botanic Garden is not far from here and I divert from the Heritage Walk continuing along Pittwater Road to take a look.

This suburban oasis, is a pleasing relief from the busy road and noisy building work. A sign warns me to be on the lookout for ticks. The paths are easy to follow and I start off taking the sensory loop which encourages the use of all five senses. I slow down to look, feel, listen, touch and taste, obeying all instructions including to “taste a leaf”, and “feel this trunk” – it is smooth and cool.

Colour in the Garden

Although it is still winter, some flowers are blooming and I am walking in short sleeves, so mild is the weather. Three brush turkeys continue with their business as I walk up to the sandstone lookout. A bird wheel instructs me to turn the handle until I hear the bird call. I can only identify three of the eight. Better brush up on my bird calls.

Turn the handle and listen

Back on Pittwater Road, the restaurants and shops reflect the multicultural mix of the local community. There’s an Afghani and a Tibetan Restaurant, a Halal butcher and an Indian and Nepalese grocer where I buy a piece of almond barfi (the rich Indian sweet) to nibble on as I continue on my walk.

The Dee Why Heritage Walk now leads me past St Kevin’s Church where the windows reflect the unit block opposite and a metal spire with bell stands tall alongside the building.

On the next corner, St Johns Anglican Church, the oldest continuing church in Dee Why, is rather ordinary looking until you take a closer look. Every window is stained glass, with the best pieces seen through the glass door.

Nearby, another church, this time serving the Dee Why Tongan Cecil Gribble Congregation is the oldest church building in Dee Why.

Oldest Church building in Dee Why

Don’t Step on me

Art Work in Dee Why

The Black Swan is a symbol of Dee Why and I find an image of a swan, first painted on the sidewalk around 1925 (now refreshed), towards the end of Howard Avenue. It is supposed to be bad luck to step on it but no one else seems to know this.

Two large three dimensional artworks on the foreshore footpath promote saying no to single use plastic, while colourful tiles depict different sides of Dee Why including the beach and surf culture.

One of the tiles

Artwork on the walkway

Large artworks by different artists decorate the walkway, but it is hard to take my eyes away from the calming rhythm of the sea. And as if there is a bird theme to my walk today, a grey heron looks at me from a rock pool before wading off to find dinner.

Reflections on Dee Why

The Heritage in Dee Why may not be as spectacular as it is in suburbs like Annandale and Randwick, but Dee Why does have a lagoon, a Botanic Garden, a beach and foreshore walk and is well worth exploring for a day. Oh and by the way, I only saw two Op Shops (but there may be more).

If you enjoyed walking through Dee Why with me, you will enjoy the coastal Sydney suburbs of Freshwater, Cronulla and La Perouse

Dee Why is on Sydney’s Northern Beaches, 18km north east of the Sydney CBD

Plan your trip at transportnsw.info

You can download the Dee Why Heritage walk here.

And a map to assist you: (You can download it here)
(Note that this is a guide only and that the time indicated on the map does not allow for any stops. I take an average of 4-5 hours when I explore). You can download the day notes that I used for my walk here. Please note that they are a guide only: